Cab Calloway: the freemason and his brothers musicians

On the above picture: Cab Calloway in Minneapolis at a Masonic ceremony,
along with g. to d. : Milt Hinton, a stranger, Keg Johnson.
All are dressed with the masonic apron as companion,
the second of the first three degrees of Masonry, from apprentice (1) and master (3rd) *.

This is a topic that can not be found at the front of French magazines like L'Express and Le Point even if they too oftenly deal with Freemasons! And because there is little study on jazz and Freemasonry. More reason to welcome the research Raphaël IMBERT who, more than being an accomplished saxophonist, has undertaken to initiate the uninitiated that we are the relationships between jazz and Masonic lodges. By empowering African Americans, Freemasonry also allowed jazzmen to create a new corporatism close to a fraternity. The Hi De Ho Blog is particularly focused on Brother Cab Calloway, introduced to the masonry by his musicians.

The recent parution of "Jazz Supreme: initiés, mystiques et prophètes" (2014, L'éclat) is the reason for us to update this 2008 article. 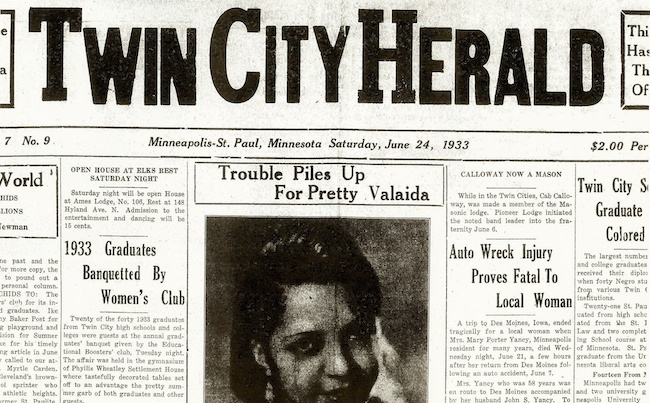 It all started in Minneapolis...

According to the newspaper Twin City Herald, Cab becomes a Freemason during a tour in Minneapolis, Minnesota on June 6, 1933.
But according to the accurate and yet inventive memory Milt HINTON, this is actually the spring of 1937, still in Minneapolis, at the insistence of Doc Cheatham, and with Ben Webster, Milt Hinton and Garvin Bushell. They are admitted to the Pioneer Lodge No. 1 Prince Hall in St. Paul.
In his memoirs, Milt Hinton explains that many established musicians in Cab's orchestra were Masons and they had almost all been admitted in St. Paul. So each time they tour the area, they went to their lodge.
Naturally, attend the ceremonies and contribute to the work of the lodges were difficult mission to perform on tour. Yet there was enough Freemasons among musicians to have regular sessions, offsite sacred lodges. This could very well take place behind backstage between two shows.
Those sessions were an opportunity to discuss how the masonry and moral rules based on the Bible (unlike in France, where the Grand Orient is secular and irregular - according to the Anglo-Saxon tradition) could be useful in everyday life....
Maybe for Cab and his colleagues it was a way to strengthen the feeling of being part of an "club" similar to the world of jazz musicians (including language, with Jive).
In his autobiography, Garvin BUSHELL (saxophonist who played with Cab between 1935 and 1937) explains that during the 40s, he had to travel in a "Jim Crow" wagon because of his skin color. But the controller, who probably saw his Freemason pin, granted his request to travel in better conditions. On his side, Jelly Roll MORTON said that a passenger believed to show his pins and his alleged membership in Freemasonry to ask for money and assistance to the whole passengers!

The brotherhood among jazz musicians

Many thanks to Raphaël Imbert for the precious informations we exchanged, and to Brendan Henehan from Minneapolis for the local documents he kindly provided.