The author of this incredible biography is my great friend and jazz connoisseur Keller WHALEN.

In 1946, Mae tackled two new showbiz areas for the first time – both performing on the legit stage and making records.

“Two in a Bed” is a broad stage farce written by Conrad Birch and produced by Jack Present and Harry Zevin, advertised as “a scream-lined panic” and a “spicy boudoir frolic!” This production starred Louise Beavers, Mae Johnson and an all-black cast. The play had been presented previously at the Great Northern Theatre in Chicago where it played for four weeks in 1944. It was also earlier presented at the same L.A. theatre, the Musart, with a white cast.

The playbill’s production notes for “Two in a Bed” promise, “Colored performers have been presented to local audiences at various times but usually in revues. This is the first time in a great many years a full length comedy hit has been offered and entirely composed of an all-star Negro cast, and Present and Zevin expect to follow with others in the near future.”   Present and Zevin had a few more scattered productions, and Harry Zevin was a production associate on the 1952 Broadway hit “Top Banana.” 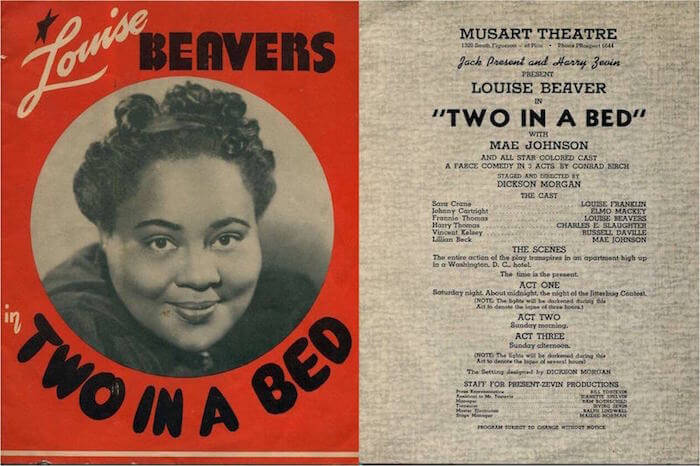 From the playbill for “Two in a Bed” starring Louise Beavers and Mae Johnson, 1946.

The playbill’s short biography of Mae included a few embellishments that taxed this reporter’s research skills.  The bio said, “From 1940 to 1944 Miss Johnson held the Alexander Woollcott Award as the most outstanding entertainer on Broadway.”  There’s no record that such an award ever existed; Woollcott died in January 1943.  “Miss Johnson opened at the Cotton Club in New York to headline the floor show for three straight years.” Her three seasons there actually totaled about 15 months.  “London and Paris acclaimed Miss Johnson during her European engagements.” There’s no evidence that she ever performed in Europe; and furthermore, during the run of “Two in a Bed,” Mae was offered the role of Blanche in a new production company of “Anna Lucasta” but refused the job because she didn’t want to leave the country for a planned international tour. 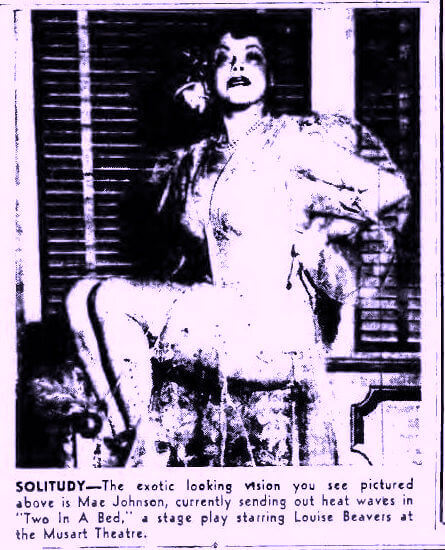 “Two in a Bed” opened February 20 at the Musart Theatre and ran for at least five weeks.  Joe Louis and Hattie McDaniel were spotted in the opening night audience. The plot involves Louise Beavers, as a matchmaker, using an experimental drug on a chemist and a girl and locking them in an apartment together while a federal agent is looking for the drug and the chemist’s real girlfriend (Mae) is looking for her beau.

The press and critics loved the production.  “Never, indeed, has the saucy play been performed with such unction and never has it been so joyously received.  Mae Johnson…plays the inventor's girl friend with naughty abandon” was the rave from the Los Angeles Times (February 21, 1946). The California Eagle singled out Mae as an “exotic looking vision…sending out heat waves” (February 28, 1946).

And here comes a recording contract! Also in February 1946, Variety reported that “Mae Johnson, blues-bawler, inked for four sides at Sunshine diskery.”  She was paired with the Austin McCoy Sextette and was touted as “Miss Atomic Blues.” 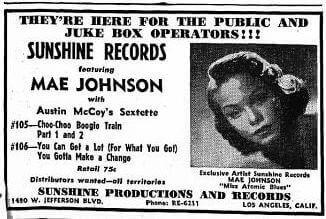 Trade advertisement in Billboard for Mae’s records on the Sunshine label, 1946.

Mae recorded four cuts for the newly formed Sunshine Productions and Records:  “You Can Get a Lot (For What You Got),” “You Gotta Make a Change” and “Choo Choo Boogie Train,” Parts 1 and 2.  Within a few months, Sunshine Records had disappeared, but Mae’s two disks were quickly re-released on the Sterling Records label.  Sterling similarly went out of business the following year. The records didn’t chart with either label.

Billboard reviewed the records twice, once when they were released on each of the two labels. First, “for some forthright word slinging of the race variety, Mae Johnson gives this new label a groovey spin,” and later predicting some jukebox success: “race spots shelling out the joints for the salty songs will care for ‘You Can Get a Lot’ with the jump fans finding favor with either of the ‘Choo Choo’ sides.” 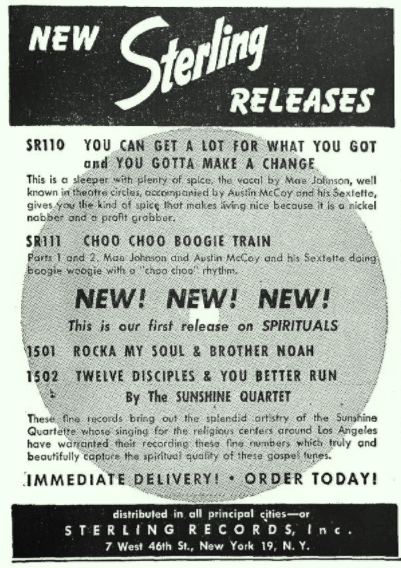 In early 1947, Mae jumped right into her next production. “Sumpin’s Jumpin’” a music and comedy revue which opened at the El Patio Theatre on Hollywood Boulevard on February 20th.

“Put together in practically the space of a week, "Sumpin's Jumpin'!" not only opened with a minimum of bobbles but it affords one of the slickest entertainments of its type.  Scaled to fit the small house, "Jumpin'," although minus a line of ponies [i.e. chorus girls], gives the impression of being bigger than the usual run of intimate revues” (Daily Variety, February 26, 1947.)

And as usual, though, Variety was not particularly fond of Mae’s performance.  “Mae Johnson dishes up some lusty blues in the downright Bessie Smith school, but her imitation of Mae West opening night was lengthy and questionably funny.”

Lee Zhito in Billboard was even less impressed, “Second portion dragged miserably.  Song work and an unconvincing take-off on Mae West by Mae Johnson didn’t help matters” (March 8, 1947.)  After about two weeks, there is no further mention of the show in the trades or in either the mainstream or African American press.

On Monday, February 24, just a few days after “Sumpin’s Jumpin’” opened, the show that Mae had earlier turned down, “Anna Lucasta,” opened at the nearby Biltmore starring Ruby Dee and Kenneth Freeman.

In the spring of 1947, Mae joined a small troupe headed by actor and comedian Nicodemus for a three month USO tour, including visits along the west coast, Alaska and the Aleutians and later stops in the Caribbean and the Canal Zone.  So, Mae got to travel internationally after all!

Mae continued to be a favorite of the columnists, usually providing something a little juicy.  “Glammer child Mae Johnson is still trying to make people believe her whys and how it was regarding that bandage on her punching hand” (Pittsburgh Courier, June 21, 1947). 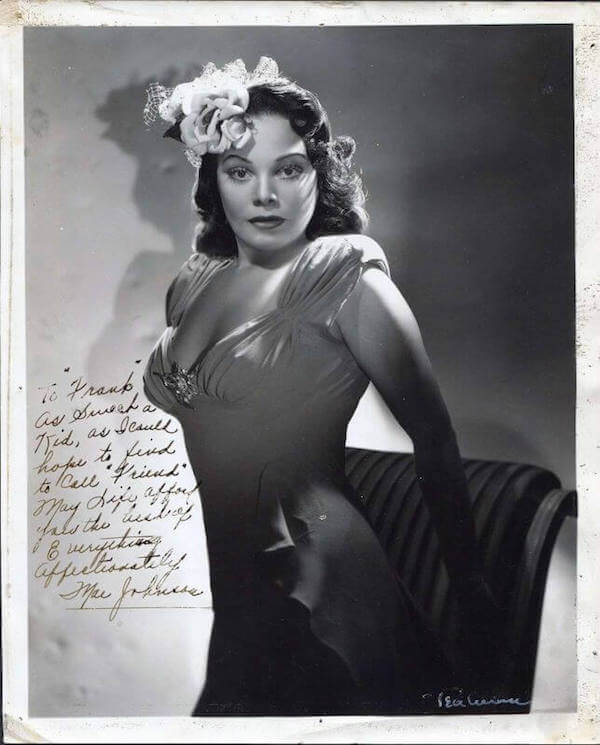 “Things are still happening at the Cresbar to be sure, but even the Mardel apartments are said to have become staid and dignified since the departure of Mae Johnson and Alyce Key” (Pittsburgh Courier, December 20, 1947.)

In early 1949, Mae partnered up her friend Alyce Key (formerly a chorus girl at Sebastian’s Cotton Club in L.A.) and opened up the Cosmo Club on L.A.’s west side where they hosted and performed and were reported to be successful in attracting a late-night crowd.

Both of Mae’s films were re-released to theaters nationally, “Keep Punching” in 1949 and “Stormy Weather” in 1950, but there was no rush to rediscover her talents and no renewed clamoring for her services.   Variety reported in 1951 that Mae was “planted” (i.e. signed) for a movie project called “With a Song in My Heart.”  That movie was made in 1952 starring Susan Hayward as a singer, with her songs dubbed by Jane Froman.  But no Mae Johnson can be spotted in the film.

Mae is twice mentioned briefly in the showbiz columns as having married one Jimmy Raverra (or Ravarra) and moving away from Los Angeles.   Here we lose touch with our star.

In 1952 she’s briefly mentioned in a Jet Magazine article as an example of how southern girls ‘go wild’ once they travel up north.  “Dimpled, statuesque Mae Johnson, brown bombshell of many Cotton Club revues, came to Harlem from North Carolina [sic], and it was not long until she was the toast of café society.  Now living in Los Angeles, this green-eyed Southern-born siren bewitched several Harlem doctors as well as rich Broadway playboys before she was finally taken out of circulation through marriage” (Jet, November 31, 1952.)  Doesn’t look like Jet did much research or tried to contact Mae to verify their story.

Did she continue entertaining?  Did she remain married?  Did she have any children?  How long did she live? The trail goes completely cold here. For more information, we’ll have to wait until the 1950 U.S. census data which will be made available in 2022.  Nevertheless, the story isn’t over! 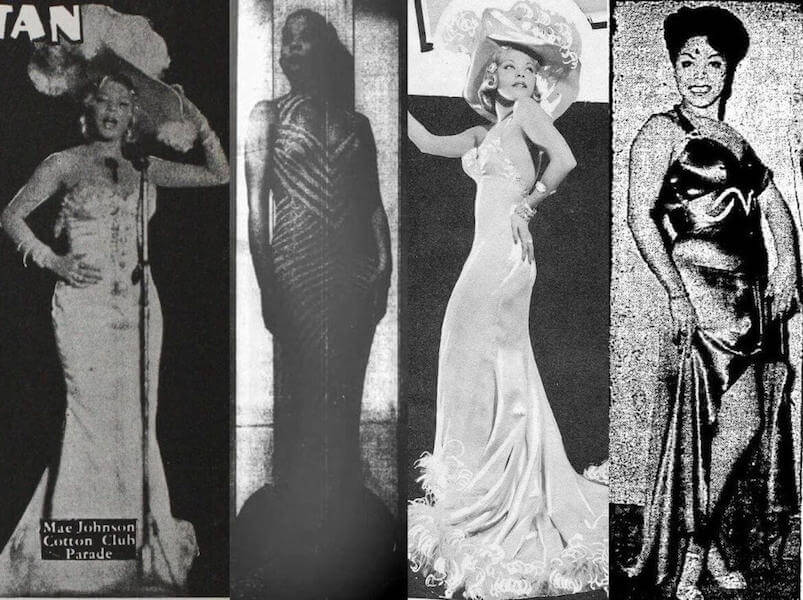 Mae Johnson poses for the camera

Next and last part:
all the OTHER Mae Johnson and “sepia” Mae West!