May 1958: Cab Calloway at the Olympia in Paris

When Cab Calloway began his series of galas May 22, 1958 at the Olympia in Paris, it has been a few years since he had performed in France. The first time was in 1934 during his European tour of the Cotton Club, then a few weeks at the Paris Empire Theatre in Porgy and Bess in 1953. There is some documentation on this series of concerts in Paris during the "events" in Algeria whose repercussions in France caused riots in the capital. This is also an opportunity to see how the audience spent an evening attending a show in the new Olympia reopened in 1954 by Bruno Coquatrix. 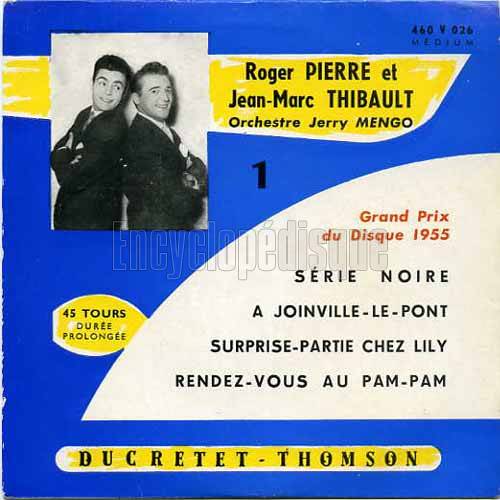 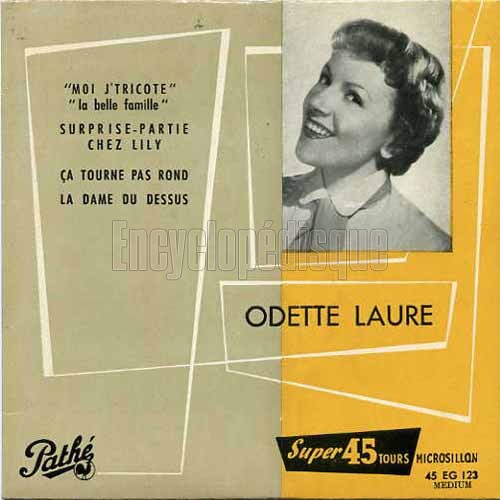 Forget the Cotton Club fame: « Surprise-party chez Lily »
is what made Cab Calloway famous then...

Yes, to sell Cab Calloway to the French public, the author of the Olympia program can't find nothing better than to say that Cab is famous in France for two reasons: he "appeared in 'Porgy and Bess' at the Empire in 1953, where he was the amazing bandit Sportin' Life, and the famous song by Roger Pierre 'Surprise Party,' which refers in each refrain of the "last disc of Cab Calloway"."

For the last of you who do not yet know this French novelty masterpiece, The Hi De Ho Blog has written a full article, true exegesis of this title recorded in 1955 by the comedy duo Roger Pierre and Jean-Marc Thibaut and then by comedians Odette Laure and Andre Duvaleix.

No musician from the original band

The program states that the "public taste has changed and he now prefers star cult than a band or orchestra." It's a question of cost and also the author of the program has some issues explaining that "Paris will have the chance to see this Proteus-man performing in his latest appearance: in a big solo number."
Those cost aspects aside, we can also assume that labor issues may have hindered the visits of American musicians to France. When he toured in some parts of the world, Cab was often not allowed to take his full band, but only 3 or 4 musicians with him. 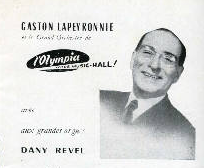 Gaston Lapeyronnie is in charge of leading the orchestra that accompanies Cab Calloway for this show. In reality, Lapeyronnie has been the home conductor since the reopening of the Olympia in February 1954.

Twenty-five years earlier, this trumpeter was considered one of the best musicians of the time. I must say he played with "le Tout-Paris" of French jazz musicians: Andre Ekyan, Alix Combelle, Christmas Chiboust, Django Reinhardt, Greg and his Gregorians, Hubert Rostaing, Ray Ventura...

Lapeyronnie even had his own band on Radio-Paris during the Occupation. He will become the Executive Director of the Olympia in the sixties. 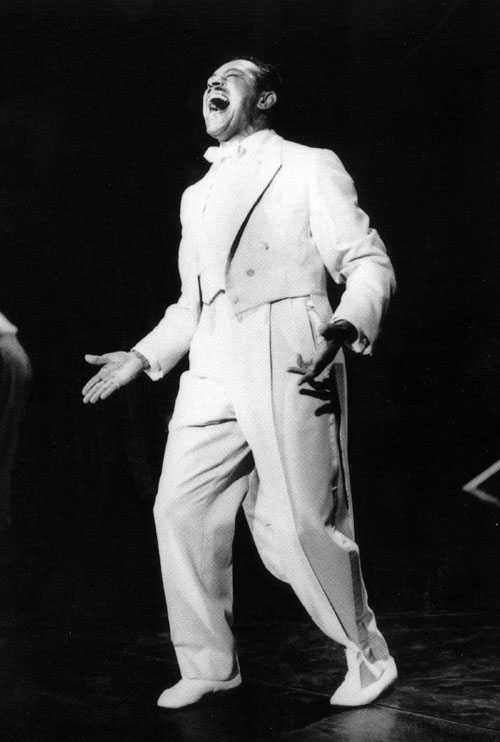 Reading the program of the evening, the part devoted to Cab should not last more than an hour. By observing the officially recorded tunes by Cab Calloway during this period, you can imagine some of the songs sung in Paris:

Arrangements were probably provided by the faithful Eddie Barefield who came along with Cab after Porgy and Bess. He also remained Cab's musical director until the late 70s. 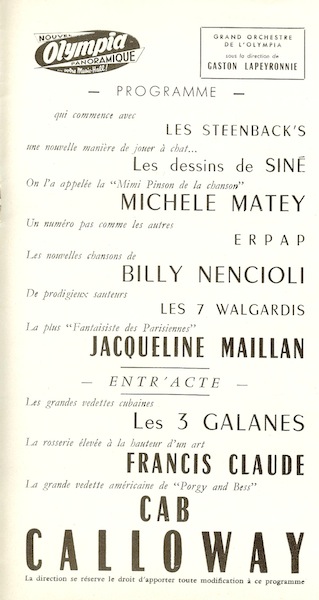 An evening full of surprises.

As was common at that time, Cab Calloway's routine closed the evening show as the main attraction. Several artists do their numbers emceed by Suzanne Gabriello. There are attractions like The Steenback's (?) Erpap (equilibrist), 7 Walgardis (acrobats) and even the young cartoonist Sine with his sketches of cats. He who has always said he never enjoyed Cab Calloway is to be found associated with him! Besides, I know of only one drawing by Siné alluding to "Pope Calloway."

Also involved are promising newcomers such as the 3 Galanes (Cuban orchestra), Michele Matey, Billy Nencioli, Francis Claude and Jacqueline Maillan. Despite a record titled "The zigouillette" she's the one who really got to be a future celebrity (even if onecan be grateful to Francis Claude for putting Serge Gainsbourg on stage...). 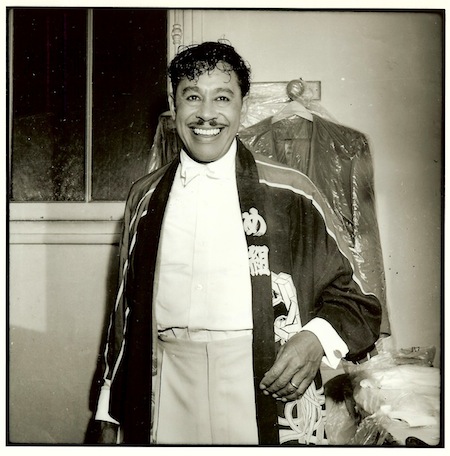 What did the critics say?

Not much... I have not found much evidence in newspapers except this unidentified clipping sent by a collector friend:

"The Parisian public was able to appreciate the talent of singer Cab Calloway, featured at the Olympia since May 22. Cab, who was one of the most popular figures of Harlem thirty years ago, remains a dynamic and pleasant vocalist. Unfortunately, this man who once ran one of the best big bands of the era with soloists such as Jonah Jones, Chew Berry and Cozy Cole, had to lower his expectations with a pit orchestra. Cab's baroque style, disjointed and eccentric, was able to pass the ramp and gave the illusion that his companions were swinging. His vocals in the 'Hideho' way reminded fans that he was the creator of the word zoot and the spiritual father of a generation."

As usual, after the concert, EP's were sold that evening with an Olympia sticker.

As noted in the Afro American newspaper in its edition of June 28, 1958, galas Cab in Paris happened "when the political crisis was the most intense. People were too upset and nervous to go to the shows, and the King of Hi-de-Ho had to play in front of many empty seats."

The journalist even adds - but this remains to be confirmed, since the program only announced the show from May 22 to June 9 -  that "he was booked for three weeks, but at the end of the second, he and the management decided to stop wasting money. (...) The commitment was then shortened and Cab and his wife left the city a little discouraged. Flop for Cab but, as a consolation, other theaters and nightclubs suffered the same punishment."
A few months later, Billie Holiday will be luckier than Cab when she takes the stage at the Olympia. And fans also win because there are existing newsreels and even recordings of her gig on this legendary stage owned by Bruno Coquatrix.
The next time Cab Calloway will come to France is in 1977 at the Festival of Nice where the king of Hi De Ho will be properly celebrated.
Then, Cab Calloway will return to the Olympia in 1987 and 1992. His concert on July 8, 1992 will be also his last in France. 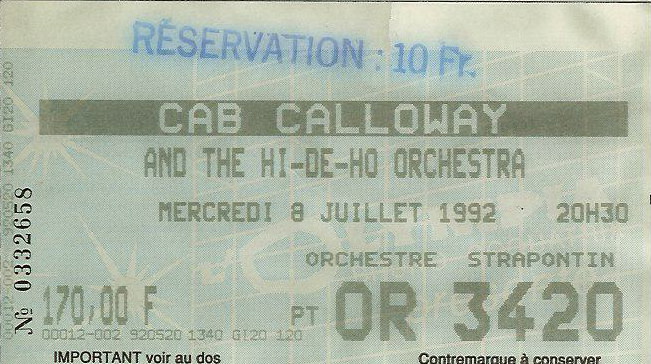